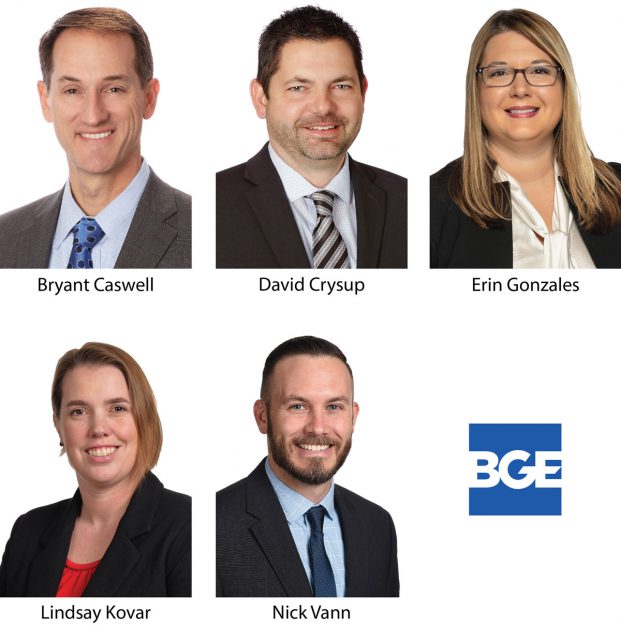 BGE announced today that five new shareholders were elected at the recent board meeting.

Bryant Caswell, PE, is a Senior Project Manager for our North Texas Public Works team. He began his career with BGE in 2014. He earned his bachelor’s degree in Civil Engineering from Texas A&M University.

David Crysup, PE, is a Senior Project Manager in BGE’s North Texas Transportation Systems Department. He began his career with BGE in 2013 as a Program Manager. He earned his bachelor’s in Civil Engineering from The University of Texas and an MBA in Corporate Finance from the University of Dallas.

Erin Gonzales, PE, joined BGE as a Project Manager in 2012 and was named BGE Central Texas Director of Transportation in 2017. She earned her bachelor’s in Civil Engineering from The University of Texas at Austin.

Lindsay Kovar, PE, is a Senior Project Manager in Houston Public Works. She joined BGE after earning her bachelor’s in Environmental Engineering at Texas Tech University.

Nick Vann, RPLS, is the Director of Surveying in the Houston Region. He joined BGE in 2012 as a Project Surveyor. He earned his bachelor’s in Bioenvironmental Science at Texas A&M University.